Are we doomed? Can humankind really solve this and avoid extinction?

There are many writers and researchers who have written articles and reports asserting that it is too late to save ourselves from climate catastrophe and probable extinction.

This is not the view of most climate scientists, who state that we still have a narrow window of time to save ourselves and the planet.

Action to avert climate damage needs to be taken swiftly and boldly, mobilising all sectors of society as has been done in world war mobilisations, to protect our planet and our children’s futures.

It is true that predicted impacts of global warming vary between models, and we heed advice that many predictions of the Intergovernmental Panel on Climate Change (IPCC) are on the conservative side. Thus, we treat the IPCC recommendations as the minimum required.

The recent report from the IPCC, “Global Warming of 1.5 ºC”, explains that collectively we need to reduce greenhouse gas emissions by 45% by 2030 (on 2010 levels) and to net zero by 2050 to have a 50-66% chance of limiting global warming to 1.5 ºC. These climate experts argue that 1.5ºC is a necessary goal to aim for to give the world the best chance to avoid the worst effects of catastrophic climate change, to give our children a liveable, healthy planet on which to grow up, grow old and live long, healthy happy lives.

The targets set by scientists and legislators depend on differing interpretations of mitigation and adaptation options, as shared by famous climate scientist Katharine Hayhoe.

We are already at risk of global food shortages, fires and coral die off as early as 2040 if we reach 1.5°C warming. While the impacts of these will be worse in developing countries they could still impact us here in Australia.

At a 2°C rise these problems would be even greater. But a bigger issue with 2°C is how we could then stop the world continuing to warm even more over coming centuries. Maintaining global heating to 1.5°C gives us a better chance to slow and eventually halt or reverse aspects such as ice melting, sea levels rising and less heat being reflected back out into space as ice melts (absorbing instead of reflecting this heat will warm the earth further).

But a 50% chance of staying under 1.5°C hardly seems good enough. You wouldn’t get on a plane with only 50% chance of landing safely, would you? So the climate emergency goals make sense. We must do all we can to reduce emissions ASAP.

In response to the predictions made by the IPCC and other climate scientists, climate activist groups have developed their own demands, such as transitioning to 100% renewables and zero emissions by 2025 (eg. Extinction Rebellion), or by 2030 (eg Australia’s School Strike For Climate, The Sunrise Movement and the Green New Deal in the USA).

We endorse these goals and highlight that this is still in the bounds of what the IPCC 1.5C special report is asking for. So we can go into emergency mode, and support the climate emergency mobilisation movement to protect our kids’ liveable world, but at the same time we can trust the scientists who wrote the IPCC 1.5C report.

While recognising that the IPCC 1.5 C is scary enough and remains our guide for taking action, some scenarios are more likely than others. This resource here explains tipping points and future projections in a relatively easy to understand way.

Long term, carbon capture technology and geo-engineering like solar radiation management may be needed but the best actions we can call on government and industry to take now are to reduce emissions, invest in renewables, protect forests, and transition to a more sharing economy.

The IPCC puts it simply:

Every bit of warming matters 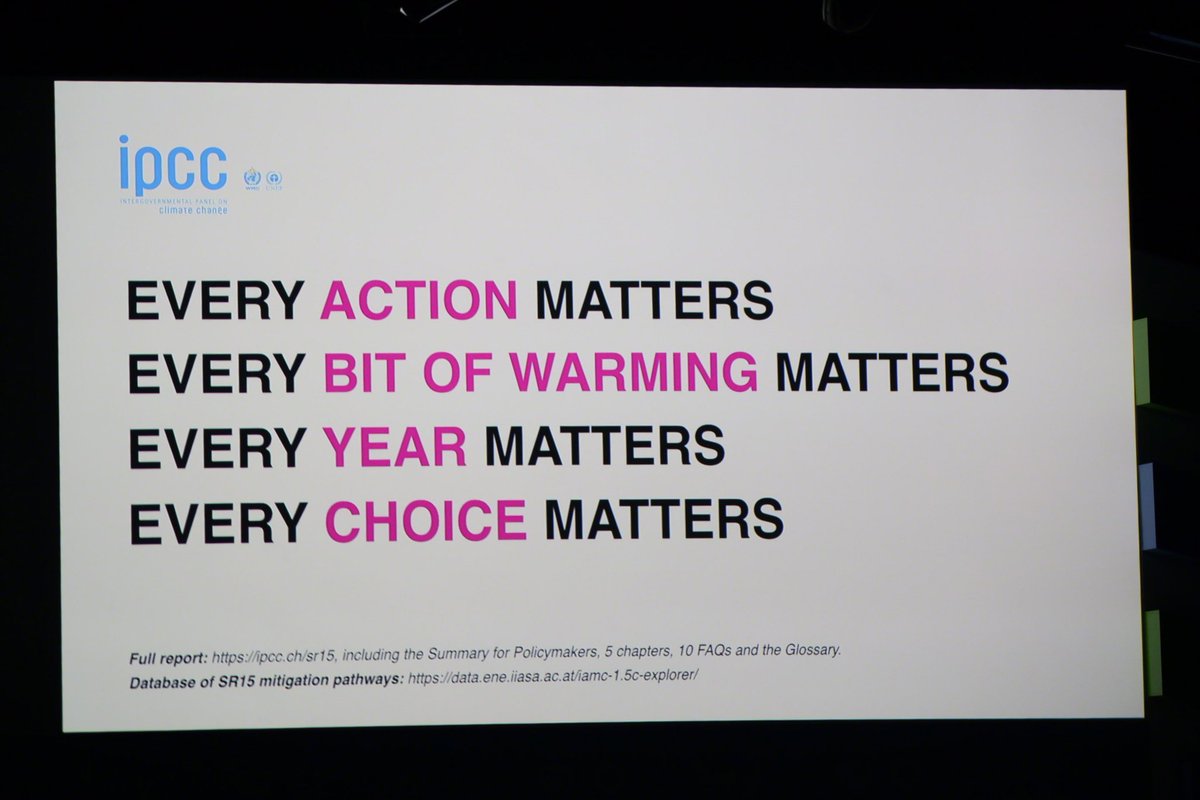 Climate scientist, Katharine Hayhoe, says “But the bottom line is this: it’s true some impacts are already here. Others are unavoidable. But my research, and that of hundreds of other scientists, clearly shows that our choices matter. It is not too late to avoid the worst impacts. And that’s why… the best thing you can do about climate change is talk about it.”