I am still having a bit of trouble understanding how bad the problem of climate change really is and what we can do about it. So here are the results of my current investigations:

So I’ve been asking a few people I know what the worst outcome of climate change is likely to be. I think that there is some consensus, as outlined in this article about Helen Berry from the University of Canberra, that unless we do fix our carbon use, humans could eventually become extinct. I will touch on this further below. With projections of 4°C warming by 2100, without sufficient reduction to our carbon emissions , we are potentially looking at a rather inhospitable planet and the potential end of human civilisation, the beginning of humans trying just to survive.

For the best known projections of Global Mean Surface Temperature Change (°C), let’s stick with the international climate change yardstick, the IPCC’s  most recent (2013) modelling. Based on this 2013 report (Table SPM.2, page 23), temperature rise between 0.3 and 4.8 degrees C are predicted (for the years 2081-2100 compared with the reference years 1986-2005), based on four different “Representative Concentration Pathway” (RPC) models. The correlating Global Mean Sea Level Rise (m) is between 0.26 and 0.82. Some would argue that the Paris Agreement is insufficient to avoid dangerous climate change, but in that case, I like to think that if it is effectively implemented it will force economies to invest in the right things that will help pull the world in the right direction.

One of the godfathers of climate change science, James Hansen, advises that we cannot spend too long above even 1°C of warming (which we have already passed) without risking dangerous runaway climate change. He stresses that in addition to increasing the use of renewable energy, there is a need for better soil management and reforestation as well as development of carbon extraction technologies that can extract carbon from the atmosphere, with an early example coming from Climeworks in Switzerland. Career advice anyone? These fields would be great to work in! 🙂

Returning to those considerations of possible extinction events, there does appear to be a few potential thresholds that we really don’t want to cross. For example, currently the oceans contain, on average, 155 ppm carbon dioxide equivalents. Historical evidence indicates that major extinction events in the past have been associated with tipping points where 310 billion tonnes of carbon enter the oceans. Also, temperature rises between 4°C and 6°C have been associated with previous extinction events and put human civilisation at risk. Now I don’t think this necessarily means that we will see the human race become extinct if we hit 4°C of warming. But a lot of people would suffer, we would lose a lot of biodiversity (leading to a very lonely planet, as artist Keith Armstrong points out), if we let this happen. Not to mention, my favourite food, chocolate, may be wiped out!! And…well…it would appear that setting the planet on track for warming of above 4°C just isn’t a good idea! I like to think that human creativity can devise technology to help remove carbon from the atmosphere and oceans but we really need to act urgently to turn this around now to reduce the pressure on our earth’s biogeochemical systems. We are already half way towards the ocean carbon cut off (155 billion tonnes, heading towards 310 billion tonnes carbon in the oceans) and one quarter of the way to testing the limits of human survival with our global temperature (1°C heading towards 4°C) and without action, both thresholds may be passed this century, as per this handy little graphic I made for this blog post (see the blog post for references): 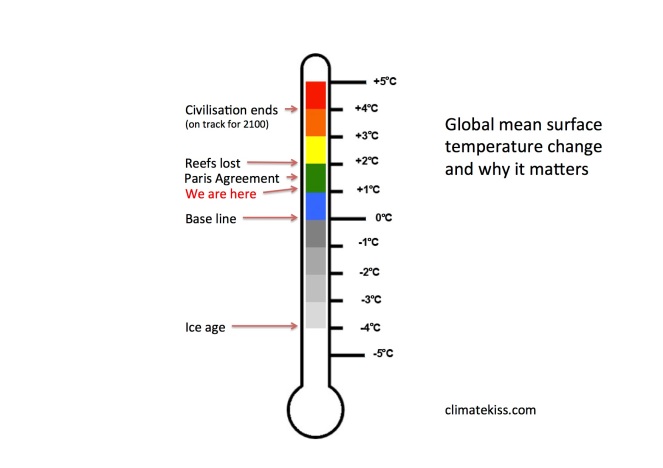 Anyway I am still struggling to figure out exactly what the scientific consensus is on how long we have to fix things (only three years to really make some key changes according to Former UN climate chief Christiana Figueres!!) but this does at least highlight that the situation could get pretty bad pretty soon. So we really need to do all that we can now!! But don’t event think about getting disheartened! I got a bit scared when I read all this for the first time but then I just wanted to focus on solutions, on being inspired by new technology and better use of our natural resources, and finding simple ways to get the messages through to our politicians. It’s inspiring to educate myself about the new ways we are going to save the world! 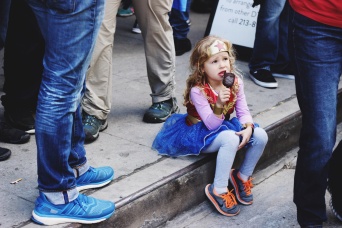 Could Naomi Klein’s idea that a society that is based on more participatory democracy, with greater community self-determination may be the only way to make the change necessary to mitigate climate change. Cities and smaller communities have so far been the leaders on taking climate change action, such as transition towns. But we are seeing some great leaps forward from various states and countries (and chocolate manufacturers!) around the world now.

A local organisation here in Brisbane dedicated to educating business leaders to work to mitigate climate change is the Long Future foundation. It’s a great term. A long future. That’s the one we want.